Embed the widget on your own site

Add the following snippet to your HTML:

Read up about this project on 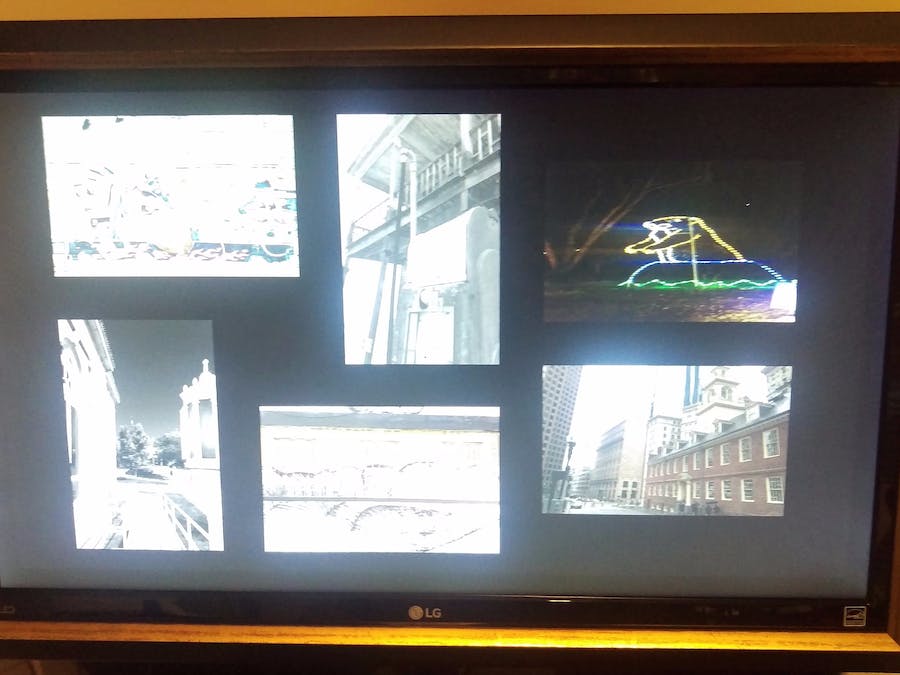 Things used in this project

My dad takes a lot of pictures were ever he goes, which has resulted in 1,000's of pictures. The last couple of years he has been using his Iphone for most of his pictures, which means that he has them stored on the ICloud. This is great if he wants to just show them off here or there, but not as a real display piece. So, for Christmas this year I had seen many projects of turning a Raspberry Pi into a digital frame, but that was not good enough, so I created the digital Collage.

The screen is a 22" LG HDMI monitor, with a raspberry pi and 1TB portable hard drive attached to the back. I had a local frame shop, do a custom frame for me. The Pi displays through an HDMI cable. The photos are an exact 4x7 ratio, spaced throughout the screen in both a landscape and portrait orientation. The whole project is setup to be a headless device, hang it on the wall or set it on a table and let it go.

However, with it being headless, I had the issue of how do I get the photos onto the frame. My parents are not very tech savvy, so what ever way it had to be simple and easy. On the side of the frame is a whole with a USB extender cable glued in, that will allow for a USB device to be plugged in and have the photos transferred. I also set it up, so that you can access a webpage hosted on the PI and directly upload them from either a phone or computer.

The display side of frame, has 6 photos with 4 landscape and 2 portrait orientation. They will fade in and out from one to another after 10 seconds.

While my code is not ready to be published, this is to give you an idea of what and how I used.

The display is running a Python Image Library code, to create the place holders and transitions.

The rest of the program is all python, it will detect when a USB drive is inserted, and will automatically transfer the files to the main photo folder. The code also detects changes into the web upload folder, will move those over as well.

The web interface which consists of two buttons on an Apache server based on the pi, is a basic PHP upload.

I see this as an continuing evolving project. The next thing I would like to do is create a better web interface for the display. I plan on having thumb nail copies, of the photos so that you can see what is uploaded, and allow for easy deletion. I also plan on creating themes, and categories, so that you would be able to display only certain photos, say of a vacation such as to Belize.